﻿ Toshiba and Carrier — association of efforts. A new ruler of conditioners Karrier of series QN 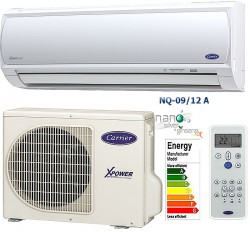 Carrier series QN, it is simple a gift from the known manufacturer of conditioners of concern Toshiba Co.ltd.

Toshiba or Karrier — new rulers of conditioners of 2012 it:

Today on July, 17th in the USA Karrier celebrates anniversary-110 years from the date of the company basis.

«Why we sell conditioners Karrier, instead of original Toshiba DAISEIKAI?»: you ask.
The answer is obvious — the price of conditioners Carrier considerably differs from the price of the original of Toshiba. What for to overpay for a brand? At absolutely identical quality, design and accessories. Equally it is literally all but the price and the name.

The rebrending of popular rulers of conditioners is a practice of many factories on manufacture of climatic technics. As an example: Daikin (Japan) and OYLM McQuay have united the efforts so why cannot unite Toshiba and Carrier? Can and, have already made it.

Merge of material and industrial base in times reduces industrial expenses for engineering preparation, advertising, etc. contingencies connected with manufacturing of a new ruler of conditioners.

Carrier 42QN 009, well this that most that Toshiba DAISEIKAI (to Thailand) RAS-10SKVR-E2. Any difference and distinction.

Buying split-systems Karrier of given series QN know, — you get the conditioner of the highest class, comparable on quality with such eminent brands of climatic technics as Mitsubishi-Heavy, Fujitsu or Daikin.

Attractive and stylish design of the internal block сплит systems Carrier 42QN 009 and the low excellent price — it those advantages of the price and quality that does Carrier ™ by the leader of sales among conditioners of an elite class.

System of a filtration of air on conditioners Carrier (Toshiba).

«And, whether is the filter on these wonderful conditioners?» So. There is everything, both a ginseng, and silver.
Systems of filtration Carrier (Toshiba) — are recognised by one of the best.

Anniversary of the conditioner — 110 years.

In the USA on July, 17th, 2012 mark 110 summer anniversary of creation of the conditioner: this day on July, 17th in 1902 the system for maintenance of the set temperature indoors has earned for the first time (conditioner) in the New York printing house Sackett-Wilhelms Lithographing and Publishing Co — area Brooklyn.

The inventor of it of those. A XX-th century miracle — Uillis Hevilend Kerrier to whom in 1902 it was executed only 25 years, Uillis named the invented device «the device for air processing». As appears from archival documents, the conditioner has been created not for comfort of people, and for the blessing of polygraphy or is more exact — «for elimination of the humidity, a stirring letterpress printing».

Conditioners have received the greatest recognition at textile factories in southern states of the USA. «Devices for air processing» stabilised humidity level that has considerably improved manufacture of cotton fabrics. The unit also has provided for the first time a stable cool in shops where tens constantly heating up weaving looms simultaneously worked. After installation of conditioners these premises have ceased to be «as much as possible fire-dangerous» as what them considered earlier.

The first house conditioner of a design of Kerriera has been established in 1914 in Minneapolis (State of Minnesota). Uillis Hevilend Kerrier in 1915 has based the company, naming its surname — production Carrier uses to this day the raised demand.

Company Carrier specialises exclusively on the climatic equipment and refrigerators, including refrigerators on intercontinental ocean courts. At its enterprises it is involved more than 45 thousand workers and employees, and the annual turn exceeds 12 billion dollars, transfers ITAR-TASS.
Source: the conditioner of a design of Kerriera.

«Roda series X-cool:: German …
Repair of payments of management with …»