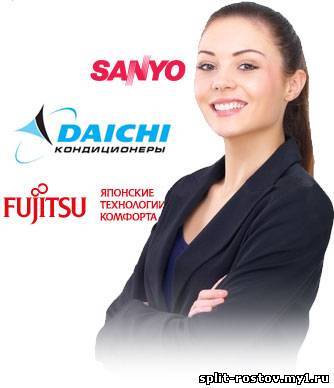 We, Split Rostov, advise at a choice split systems, to adhere to conditioners the rule of reasonable sufficiency, — in the ratio the price — quality.

The informative information about сплит systems, opinions of professionals.

From the point of view of the price, quality and reliability of the offered technics, all conditioners can be divided into three groups conditionally.

The first group, — elite, it basically the hi-tech Japanese companies of Mitsubishi-Heavy, Daikin, General-Fujitsu, Sanyo, General Electric. These conditioners not only with excellent operational characteristics but also as there are hi-tech systems of self-diagnostics and protection.

It is possible to refer to the second group of conditioners of middle class of Japanese and Korean manufacturers of Hyundai, LG, Fuji, Hitachi, Sanyo, Panasonic. They have high enough reliability and a good parity the price / quality.

In comparison with elite conditioners of air, — are less safe, above noise level and other insignificant distinctions.

The third group includes the Korean, Chinese and European manufacturers Pioneer, Panasonic, Chofu, Hitachi, LG, GREE, AUX, Midea, Chigо, Ballu, Hyundai, Dantex, Funai, Tadiran, AEG, Electrolux. If there are distinctions between the first and second groups they are so insignificant in comparison with the third group, where a considerable variety, as on quality and the price in this group, and the claims arriving from consumers of conditioners is observed.

Quality and reliability of conditioners of the American and Israeli manufacturers in Russia, — is not present trustworthy information. These conditioners, it is possible to carry to the third group, instead of to last.

It is possible to carry to a class of elite conditioners:

Conditioners in this group are expensive enough in comparison with the second group from 700 to 1500 dollars for split-system of 2,5 kw.

Service life of such conditioners, сплит systems not less than 10 — 13 years.

The developed systems of protection against misuse have the majority of conditioners of the first group. They are equipped by devices for self-diagnostics and protection which excludes conditioners in misuse, an overload or in case of other dangerous situation.

Maintenance of steady work in a wide range of temperatures.

Modern design and the sizes.

Many  systems, conditioners of the first group it is made outside of the rising sun country, but at all does not reflect their quality and the price. The reason that modern factories for conditioners completely automatic and the human factor is shown to a minimum, but functional control and entering control over quality of production demand human intervention.

For example, Mitsubishi-Heavy conditioners — one of the best and the most sold all over the world, — are made in Malaysia, Thailand and Japan. Mitsubishi conditioners have stable quality and long guarantee period, irrespective of where they are made. Besides, each factory has the specialisation and one of split-system blocks one can be made in Japan, and in Thailand.
Characteristics of conditioners which are in the first group.

It is difficult to classify all elite manufacturers as distinction between them symbolical, but nevertheless probably to define some difference between them:

The first conditioner the inverter

In 2002 an alliance with Toshiba — Sanyo (Japan) — Japanese inventors of air conditioning have united, and it has occurred in far 1903.

«Mitsubishi». The largest Japanese corporations, — a part of the market of climatic technics with two brands — Mitsubishi-Heavy and Mitsubishi-Electric which as a whole have no distinction. History of creation of a brand.

Typical advantages of elite group, — high reliability, are protection against low pressure, low noise level, durability, the low price of the maintenance of the conditioner.

In 2011 have appeared on sale of model of Mitsubishi of a series new business, — capacity of 2,6 and 3,6 kw, — супер.тихий very low level of noise and with improved aerodynamics.

In these models of Mitsubishi there is a rare possibility for household conditioners of air automatically to regulate a direction of an air stream not only on a vertical, but also across. It is made in Thailand and Japan.

Daikin. Traditionally are considered as the best household conditioners in the world. Thus they have various advantages in comparison with other manufacturers in the first group.

There are models Daikin where some components of the compressor of the conditioner are hi-tech and unique , are applied only in conditioners Dajkin. Besides, they have one of the most well developed system of self-diagnostics and protection.

Modern technologies have inventory Digital DC. Nay the best in the class. A class plus. With high level of heating. Technics for those who has kept adherence to original Japanese manufacture.

Fujitsu. — the reliable conditioner which has been checked up by time, having stable quality. Are offered under three brands — Fujitsu, General Fujitsu, Fuji Electric. A unique minus — insufficient protection against misuse of some simple models (there is no gauge for antiaircraft defence and low pressure, a vacuum bomb a joke.) very reliable conditioner. It is made in Japan, Thailand.

Small manufacturers on volume of the elite companies have entered the market of air-conditioning with several models, but quality and with an interesting innovation — Plasma cluster. They are made in Japan and China.

Conditioners of the second group are a bit cheaper — from 550 to 850 dollars for сплит system of 2,5 kw.

Conditioners from the second group hardly hold out to leaders but only if they do not aspire to decorate the conditioner наворотами, but it not bad conditioners, сплит systems of sufficient degree of reliability.

Conditioners, split systems in a parity the price / quality, is a good choice in this group.

We, Split Rostov, advise at a choice сплит systems, to adhere to conditioners the rule of reasonable sufficiency, — in the ratio the price — quality.

Considerable distinctions between conditioners of the second group will be, except for De Longhi and Air well which have much higher noise level.

To the third group the budget, it is possible to carry such brands, as De Longs, Rolsen, Haier, Samsung, Hisense, Gree, AUX, Midea, Chigo. These conditioners the cheapest — from 300 to 600 dollars.

They have satisfactory reliability and can receive finally a good choice at the limited financial resources. Lacks of these conditioners appear, at comparison with conditioners of the first and second group, even without an exception, and Haier Hisense, despite introduction in manufacture of high Japanese technologies, we want to carry them to the second group.

•1. Marriage level in these conditioners makes more than 2,5 — 8,5 %. The Greatest problem a fragile cover of the panel of the internal block сплит systems.

In different parties can reach in tens times more marriage. It is possible for parties with more than 70 percentage marriage, but it is more problem for operation service, instead of the buyer. It is necessary to note, and considerably smaller service life of such conditioners. For example, such manufacturers as LG and Samsung with service life, at the best till 5 years are offered.

•2. Protection against misuse practically is absent. The user should remember constantly and the nobility in all subtleties work of the conditioner, the indication and councils about operation in instructions.

•3. The noise level in these conditioners also does not maintain criticism, especially in the lowest price category.

•4. Other lack of conditioners of the third group — the simplified control system.

In comparison with conditioners of the first and second groups — it is established much less gauges therefore in conditioner work have considerably narrowed parametres and temperature modes.

For example, conditioners of the budgetary price and quality, at a frost of 5 degrees on Celsius, fail definitively. At the same time, if it is planned to use such conditioner only for cooling or soft heating, in very warm weather, in a temperature mode within demanded parametres, that such сплит system will approach you.
•5. Conditioners and сплит system of budgetary groups demand to themselves special attention and leaving, i.e. the price of the maintenance of such conditioners automatically increases that once again forces to reflect on expediency of such purchase.
•6. If to compare quality of conditioners in the third group, accepting quality LG and Samsungas reference for the third group. It is possible to choose the conditioner, rather quite good quality for this money.
•7. At a choice of budgetary conditioners, сплит it is necessary to pay attention of systems to presence of spare parts from the companies-suppliers.
We sell and we establish сплит systems in Rostov, installation сплит systems, installation of conditioners in Rostov-on-Don.
Therefore claims to quality budgetary сплит systems it is transferable on the manufacturer.
Т е. If you save money should be ready to some inconveniences.
•8. All modern conditioners irrespective of its cost have very difficult functions of the user, a remote control, systems of cooling, heating, ventilation (reference) and a mode of drying, automatic maintenance of the set temperature, the timer for inclusion and deenergizing, and also additional electrostatic filters, т. д...
We advise at a choice сплит systems, to adhere to conditioners the rule of reasonable sufficiency, — in the ratio the price — quality.